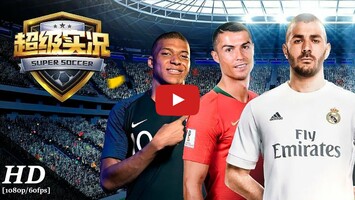 Advertisement
SUPER SOCCER is a 3D soccer game clearly inspired by FIFA and PES, where you can face off against AI as well as online opponents from across the globe. On top of that, you can have stars on your team from the get-go.

SUPER SOCCER’s controls are perfect for touch screen devices. Plus, this game has features that no other Android soccer game has. On the left side of the screen, you have the joystick, while on the right, you have action buttons to pass, center, shoot and sprint. The most exciting development is related to shooting: you can press the button and drag it slightly to aim your shot better.

One of SUPER SOCCER’s strong points is the wide variety of game modes that you can use from the very beginning. You can play friendly matches both online, as well as against AI. At the same time, you can complete several training circuits and play in different leagues and international tournaments. On top of that, you can recruit new players for your club as you go.

SUPER SOCCER is an excellent 3D soccer game with fantastic graphics. Plus, players depicted in the games are almost identical to real-life players. This game’s controls are perfect for touch screen devices. Also, it features developments that FIFA and PES have yet to add.
Advertisement

will give five star if i start playing it.. the game is stuck at 100% second loading

I love this impudent game

Dream League Soccer 2019
Build the greatest soccer team, ever
8 Ball Pool
The best pool game for Android
eFootball PES 2021
The most realistic soccer game on Android
Vive le Football
Soccer in its purest form
FIFA Soccer
The 2018 / 2019 soccer season is now on Android
Carrom Pool
Get rid of all the tiles on the board
World Cricket Championship 2
Relive the world cricket championship on Android
Dream League Soccer Classic
A great alternative to FIFA or PES for Android
Advertisement